You know those friends you call ‘ride-or-die’, ones who would eagerly do big things for you before you even ask. There has to be a big gesture involved before you can confidently call them that. I had one of those. I still do. Her name is Tori and I’ll tell you how she earned the status.

There I was with Tori, nervously waiting for the love of my life to show up. If we were not in a bar at Lekki, I would have sworn that someone was pounding yam in the next building. Nobody was pounding anything. Except my heart, pounding so loudly as if it was going to explode. My hands were sweaty. My heart would not stop thumping. After crushing on Joshua for months, he had finally noticed me. We had been talking online for a while and now, it was the night – our first date – and I was too nervous.

I scanned the place anxiously, looking at people’s faces and guessing why they were there. I wondered if they could tell how nervous I was. Could they see my face? Come to think of it, if I could see their faces, then they could probably see mine. I watched a couple at a table across very closely. The girl seemed a lot more interested in their date than the guy. He seemed to be more interested in something on his phone. Was it another girl? Oh no! Was that going to be Joshua and me? I let my eyes leave ‘cheating-guy’ couple and wander to the girl sitting over at the lounge. She had been there for at least 20 minutes. I know because that’s when Tori and I walked in and we met her there. She was starting to look impatient. Maybe her boyfriend stood her up. Was Joshua going to do the same?

I left ‘stood-up girl’ and assessed a few other people, asking questions in my head and panicking until I couldn’t take it anymore. I was already stress-biting the fingernails I just fixed to look pretty for Joshua. It was then Tori suggested alcohol to take the edge off. We were already at the bar anyway. I immediately ordered a bottle of 33 Export Lager Beer and filled my glass. Ohh it tasted good! And it was definitely working. I could feel the nervousness melting away. I finished the first bottle and ordered another. It was 33 Export. It was that good. But then I ordered another. And another, until I could not feel any iota of shyness. I felt like I could talk to anybody in that moment. I felt like Supergirl!

Just then, I looked at the entrance and saw Joshua walk in, in all his shiny, six-pack glory. He seemed to be floating but then, it was probably just my eyes. He walked up to me and whispered in my ear “Hey beautiful…”. It felt like magic. He was magic. He then took me to the table he had reserved for our dinner date and like every good friend, Tori made herself scarce so we could enjoy our privacy.

It was the best night of my life. We had an amazing dinner and when we were done, he went on to drop me at home. He walked me to my door and said goodnight while looking me so intensely in the eyes. I just knew that he was about to kiss me. It was the moment I had been waiting for. I closed my eyes and went in for the kiss. Slowly, we brought our lips closer to each other and just as our lips were about to touch, everything went dark. I felt a sharp, heavy pain in my head and I tried to open my eyes even though it hurt as hell. I finally did and the first thing I saw was my roof. I tried to look around and that was when I heard Tori’s voice.

“Huh? What happened? Where is Joshua?”

“Erm…you had too much to drink and you passed out.”

I’m sure she thought I was crazy. That was when I realized it was all a dream, or maybe a 33 Export trance.

“Wait! Oh my God! So what happened to Joshua?”. I was freaking out. Did I just blow my opportunity with the love of my life? Haaaaa! Today, somebody will die.

“Calm down. That’s what I was about to tell you. He came like immediately you passed out. There was no time…”

“And I paid the bartender to let me take you out through the staff entrance. Then, I came back in and told Joshua that you were there waiting for him but you had an emergency so you had to leave. I made it sound really serious so he’d be tempted to play knight-in shining-armour instead of knight-in-angry-armour.”

It was then I looked at my phone and saw the text from Joshua.

Yesssssss! We had graduated to “Josh”. My instinct was to jump up and give Tori the biggest hug of her life, and I would have if I was not reminded of the serious hangover I was having as I tried to get up.

But it was all good. No, It was better than good. I still had my Joshua. Nobody was dying that day.

It’s been two years now and Josh and I are engaged. I later told him what happened that night and he laughed so hard at me over it. Tori is going to be my maid of honour and we are definitely serving 33 Export at our wedding.

She’s my ride-or-die and today, nobody will die.

39 thoughts on “RIDE-OR-DIE, TODAY SOMEBODY WILL DIE!” 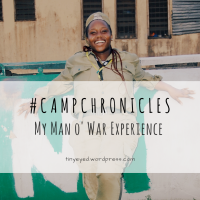