Yaaaaassssss….I’m backkkk!!! I missed yoooouuuuuu😭😭😭. These two weeks break felt like 2 months honestly. It feels really good to be back (back from camp and back to the blog😁). Camp turned out to be really exciting when I gave it the chance to be. And just like I promised, I’ll be taking you all on that exciting journey with me right now. All the images I used (except those from external sources) are raw images with no form of edits because I want you to feel the effort and struggle with me😂😂.
I’ll share my experience at the man o’ war village in camp. It was such an emotional experience for me because I usually don’t attempt dangerous things. I’ve always wanted to but I hardly ever do. I think the closest I’ve come to something like this was the canopy walk at Lekki Conservation Centre, which is actually the longest canopy walk in Africa 😭😭. My heart left my chest for a bit while doing that one.

When we got to the man o’ war village,  to be honest, all the gadgets seemed so easy. In my mind, I was like “So this is it? mtcheeww…” It was not until they brought some man o’ war guys to do a demo for us on all the gadgets that my heart started to skip several beats. These people were experts and were doing it skillfully of course, but I could see that it took a lot of effort. At this point I’m like “I don die! Who send me? 😭😭”

After the demo, it was time for us to begin. We were put into groups to attempt each gadget and for my group,  our first gadget was:

Soo… this is kind of what the beam looks like but wayyyyy higher. It’s like 7 or 8 feet above ground level. 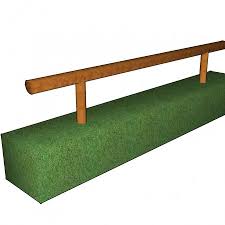 When we got there,  the instructor said “Okay this is the beam blah blah blah. Now, this side you are standing on is your village, but you are under attack. You have five minutes to get everyone to the other side safely. Under this beam is a valley filled with reptiles so if you try to pass under, you will fall inside and die. You have 45 seconds to come up with a plan and 5 minutes to execute. Your time starts now!

But as soon as I heard “your time starts now! ” my survival instincts kicked in.

In 45 seconds, we decided on what we thought was most logical to us – two strong guys lifting us to climb and another two on the beam helping us land safely. The lifting started in earnest. But as I watched, I started getting scared,  and moving back. People kept going and going until I realized a lot of people had actually gone and I didn’t want to be the last person standing. So I took the bold step forward. Despite my James Bond bold step, the moment my feet left the ground, I screamed. 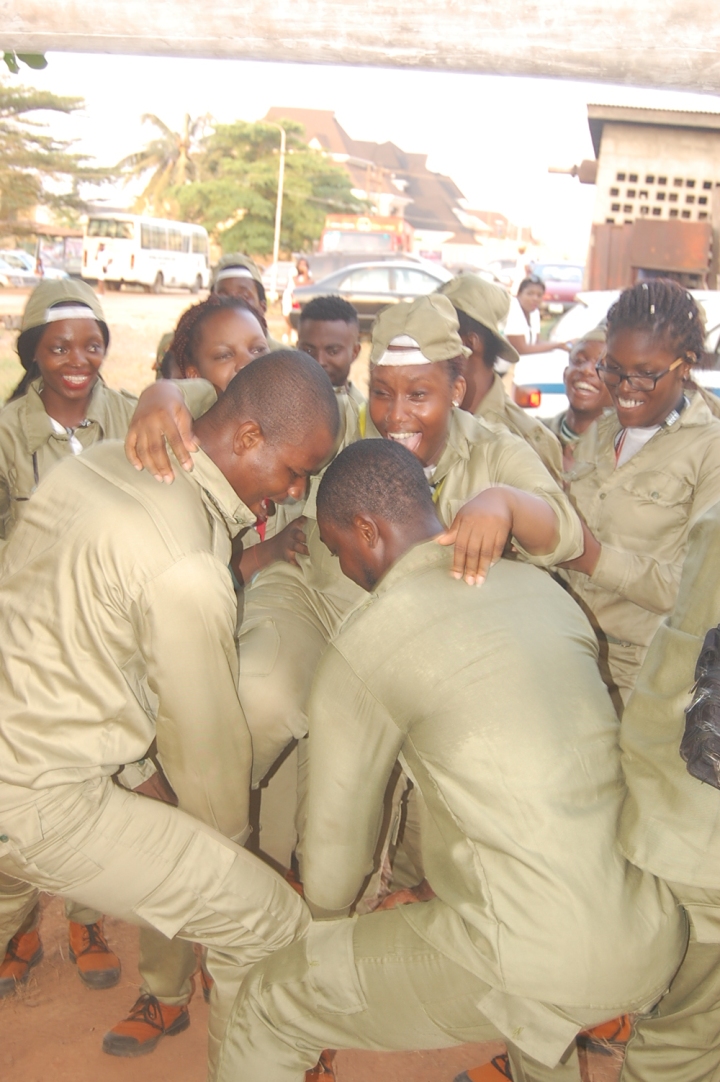 But yes,  I made it over the beam. 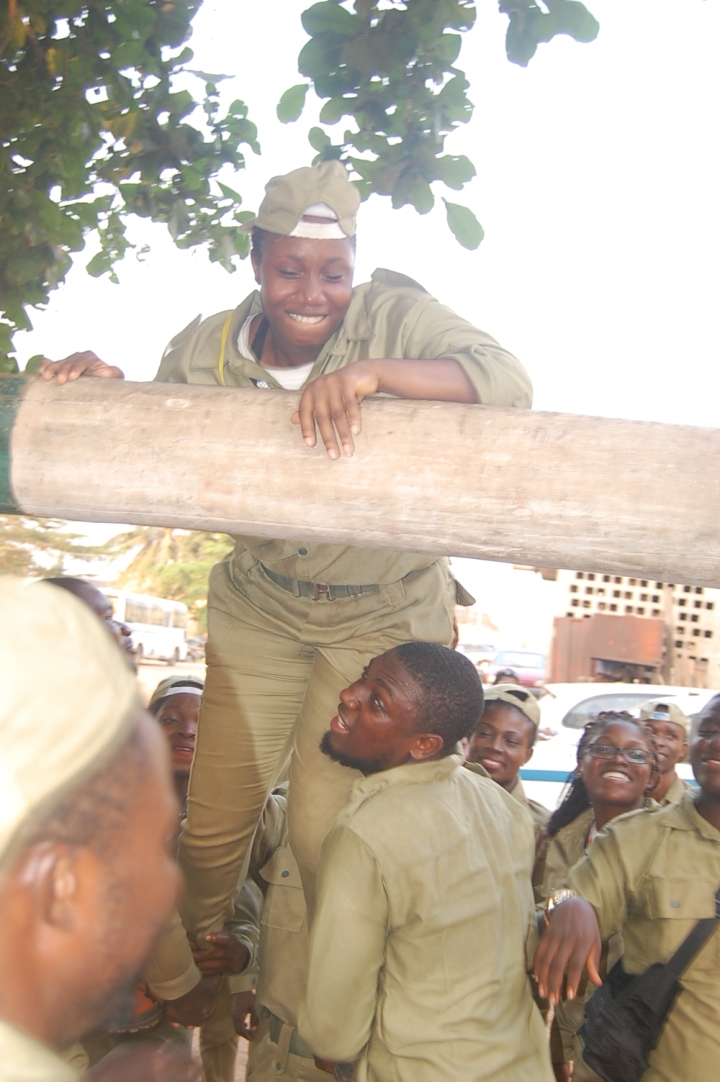 Unfortunately, at the end of our five minutes, we still had two people at the other side😭😭 so we failed that gadget course.

Still, I was happy I did it and I had fun doing it.

What I learnt on the beam

Teamwork is very important. When working with a team, it’s important to work together. If you think that because you’ve done your part, it doesn’t matter what other people do, then your project won’t work out. I had crossed the beam. Almost all of us had. But we still failed the gadget course because two people had not, even though they were the ones carrying all of us. Some deep stuff right there 🤔.
The next gadget we moved to after this was:

Thankfully, I was coming from the beam because I would have been even more scared if we came to this gadget before the beam. It was like the beam but it was a wall, wayyyyy higher and scarier.It is literally a 12 feet wall and just like the beam we were asked to get over it using teamwork but this time around, they didn’t time us. I guess they realized we are just civilians after all😂😂😂.

It was hard to get up a 12 feet wall that had nothing to hold on to at all. Three people lifted from down (two on your legs, one on your buttocks)  then you stretch your hand to the other two people up who would then pull you while you lift and throw yourself to the other side. I started thinking of how to avoid this one because I really didn’t believe in my ability to do all these climbing things. Just as I was contemplating this, we heard a very loud rip from the girl presently climbing. Her khaki pants tore at the crotch. 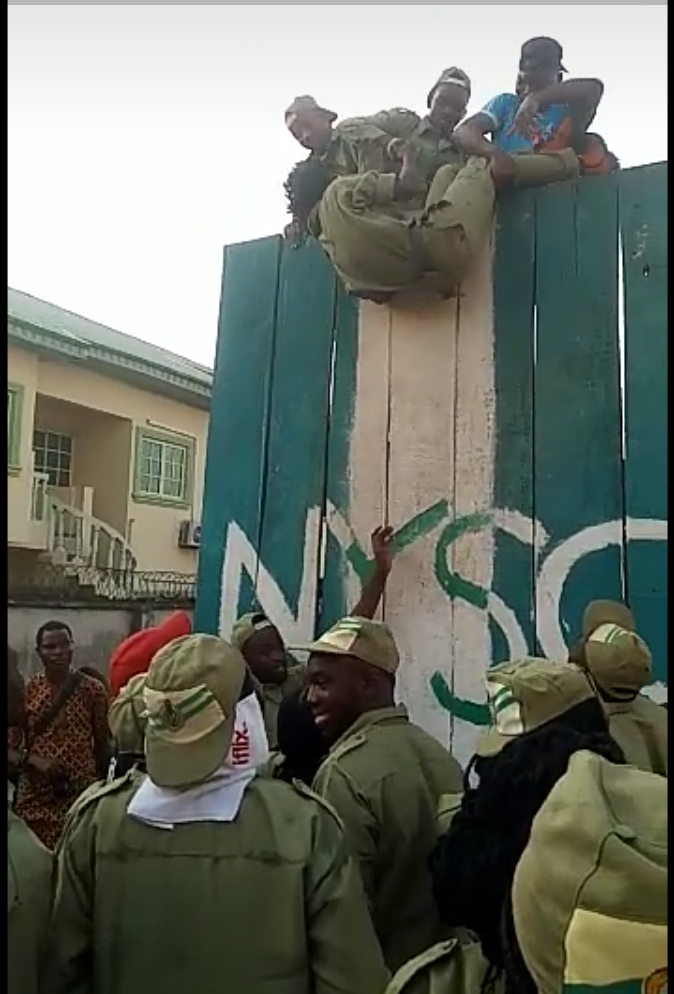 And that was when I decided immediately that I was not going to do this gadget. It was as if he heard me because almost immediately, my platoon man o war instructor shouted “You!!! Have you done this? I know you haven’t. Come here.” You can imagine how much I wanted to cry at that point, like what if my pants tear? 😭😭😭😭
I went there shaking as they lifted me like meat😭😭😭 and threw me up. When it got to the part where i had to lift myself over,  I almost started crying.

I  didn’t want to over spread my legs so my pants won’t tear but there was no way to lift and throw myself over without doing that. I remained hanging like that for about 10 seconds and I knew those guys’ hands were aching, so I took the risk and crossed over! 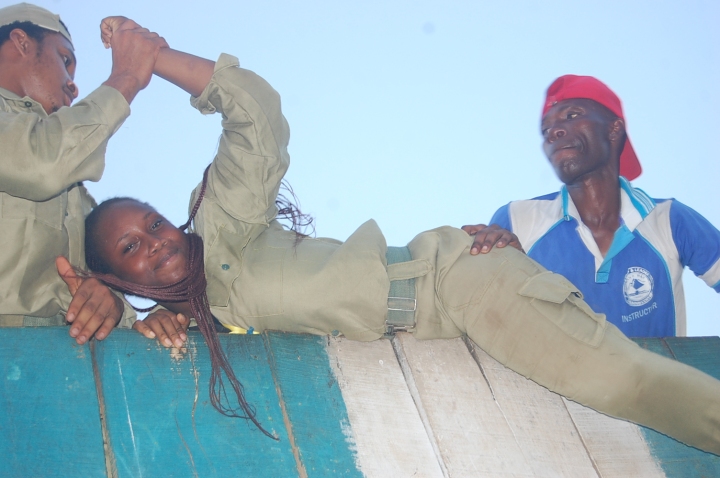 What I learnt on the 12-feet wall

I almost let fear rob me of that beautiful experience. Many have let fear rob them of ideas and dreams that would have changed their lives if pursued. I’ve dropped all my fears at the 12-feet wall.

The next place  we went to was:

The course is made up of the floating log, Tarzan rope,  endurance crawl, tyre tunnel and 5 or 6 feet wall… I’m not sure. I was very gingered to do this one. This was me at the beginning of the course.

The floating log was meant to simulate wood floating on water and we had to balance ourselves to walk over it. I fell the first time and drowned 😂😂😂 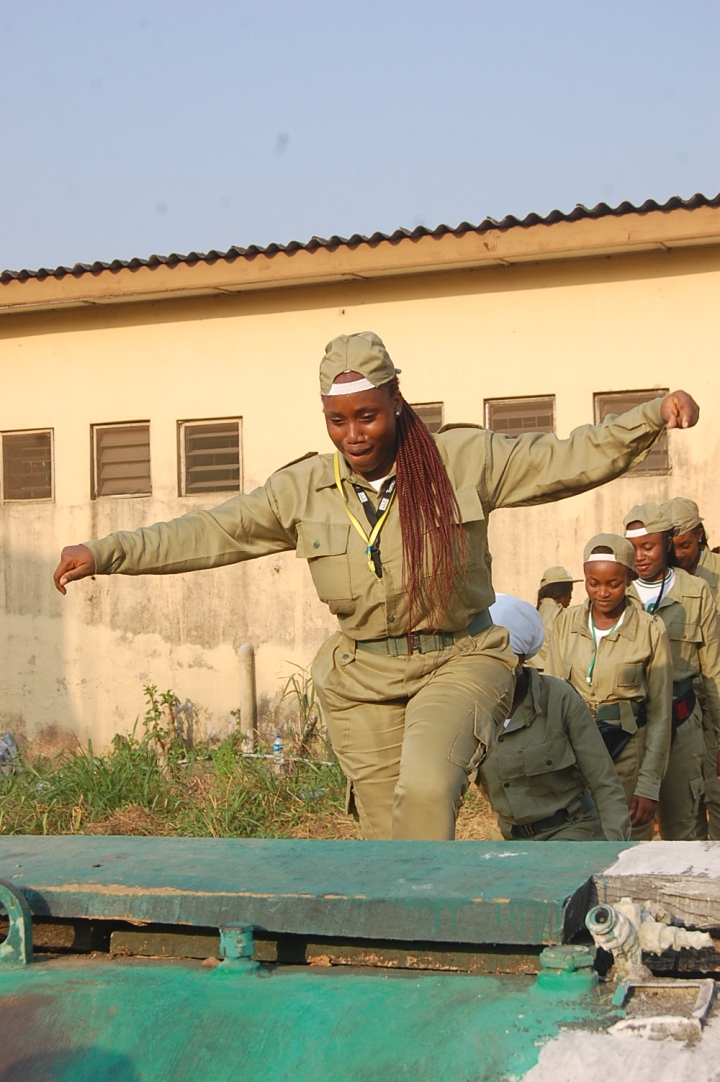 On the Tarzan rope, we had to hang on to a rope hanging from up while standing on a slim log of wood and then swing to another slim log, also simulating crossing a river. I looked at the rope like “Guyyyyy you must not let me down😂😂😂.” 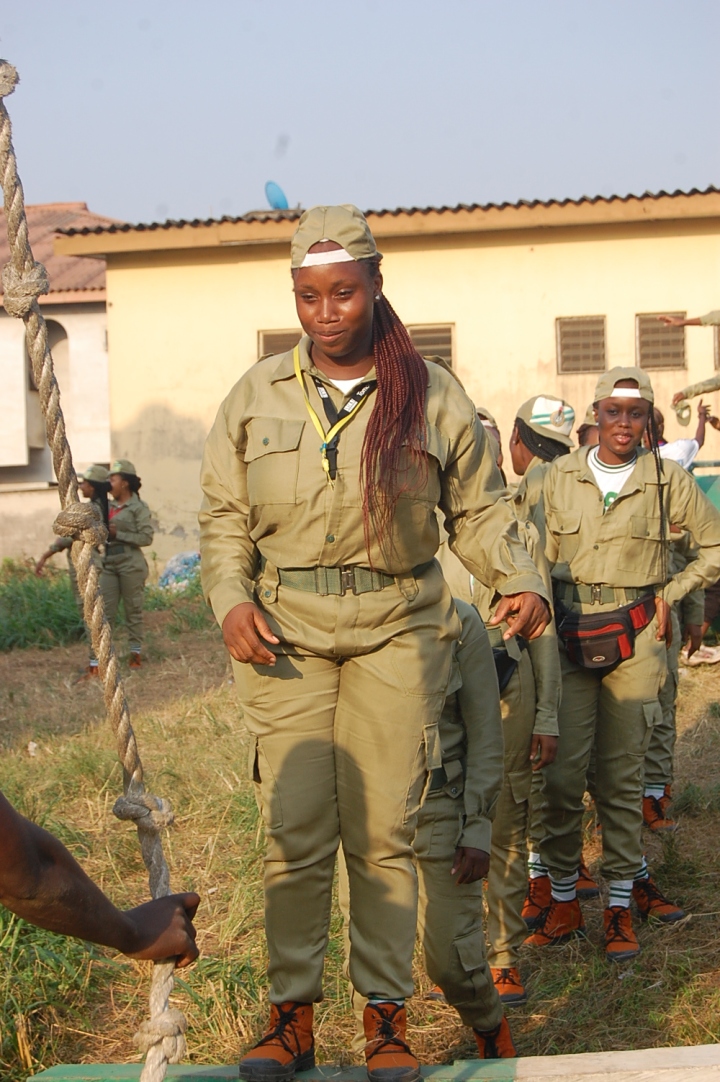 I ended up doing that perfectly. 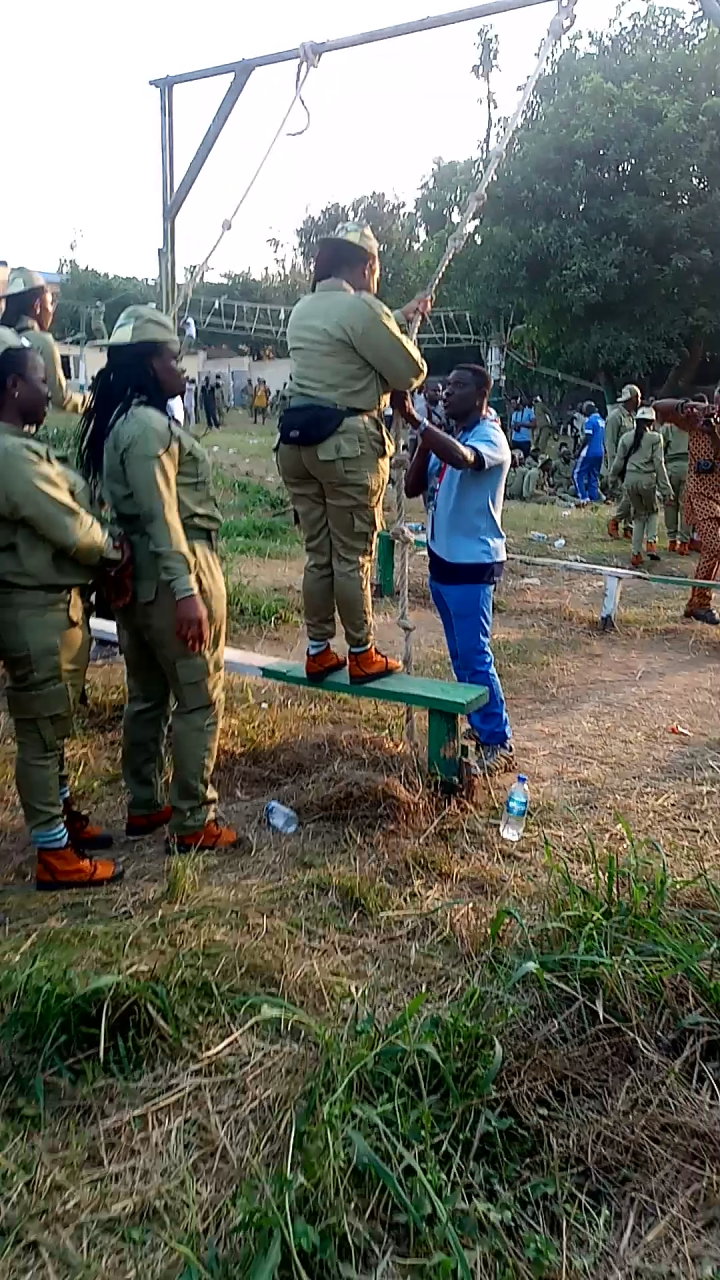 This one is made up of very low rods taped with barbed wire at the top so we had to crawl under the barbed wire to get to the end. I won’t lie, this is also one of those gadgets that seemed easy on first look but the moment I got inside, I wanted to get out. It was wayyyyy lower than it looked from outside.  First of all, the girl in front of me was slow and her boots were literally in my mouth, I was thinking about how I would wash the khaki I was crawling with, my hair kept getting caught in the barbed wire and the man o war guys kept shouting “Move it! move it!!” like “Uncle should I fly?” 🙄. I finally got to the end but I was too upset to take a picture😥😥.

The Tyre Tunnel
The tyre tunnel is basically what it is, crawling through a tyre. 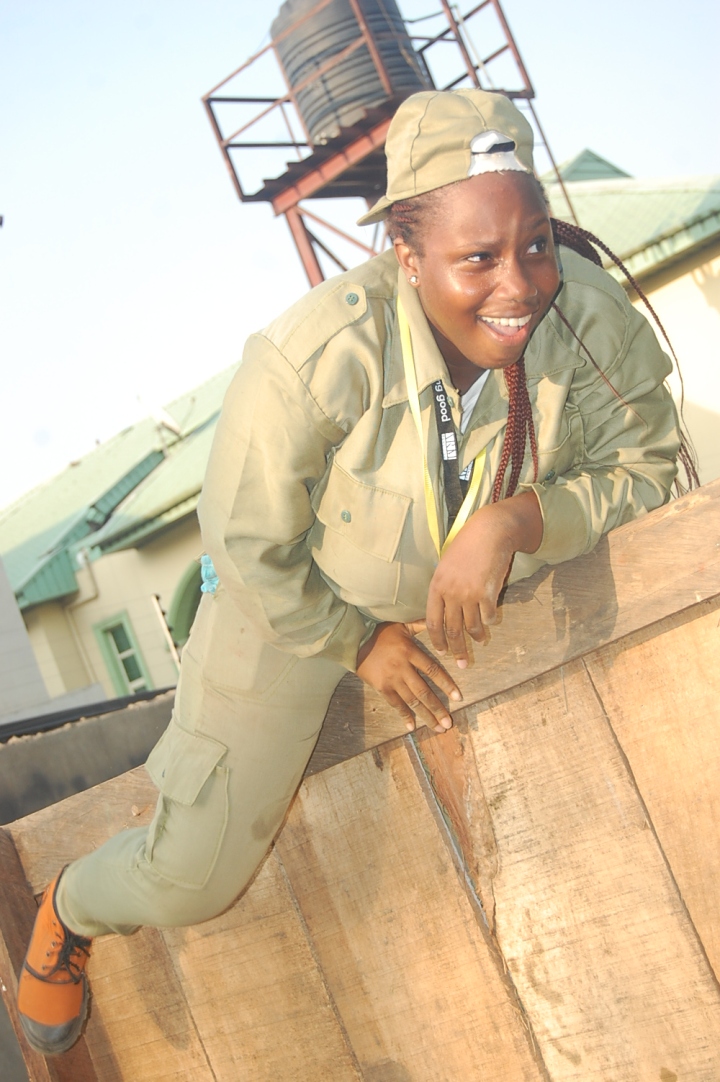 What I learnt from the obstacle course

The next gadget was:

I honestly don’t know what it is really called but I’ll just call it that. This is what it looks like at a wide shot.

Here we had to to climb to the top then switch hands and somersault to the other side.

It seems easy also but may be quite challenging if you don’t follow the instructions. I was the first girl to attempt this one and everyone was hailing me 😁💪. 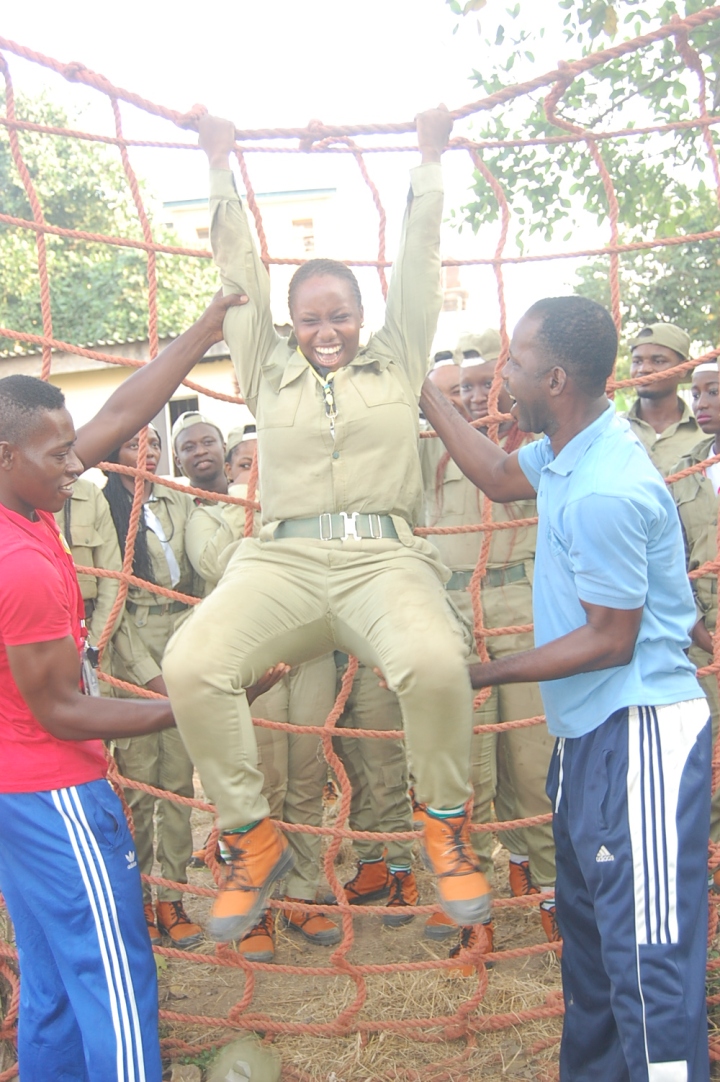 It was quite simple for me though (as a badass that I am😁😁😁).

What I learnt on the rope ladder

Those who walk do so by common sense; those run, run by principles;  and those who fly, fly by instructions. That’s why at the Aviation school, you have instructors not professors.

Following instructions makes everything a lot easier. It is the key to a high-flying life.

This brings me to the final one:

It consists of the Jacob’s ladder, leopard crawl, the knot bridge and the tension rope.

The leopard crawl was honestly my toughest of the day.  I got to middle and actually asked myself “who sent me” while seriously shaking. It looked really easy from afar. But while I was on it, I thought my life was over because it was really far from the ground so there was no option of jumping down without breaking something.

It also involves a lot of focus and coordination just like the Jacob’s ladder but this one was harder. You have to move by lifting your leg at a particular angle,  not too high that you won’t be able to control the ropes again and not too low that you’ll be dragging them along the ropes. You have to place your feet a certain way and grip the ropes a certain way. I was so so relieved to finally reach the end. If you see how fast I rushed down ehn😭😭.

The next in the assault course was the bridge…and that was when they blew the whistle and said “Time up!” but this knot bridge has been exciting me in my head,  there was no way I wasn’t going to climb it. And so I started climbing, without any instructor 😂😂 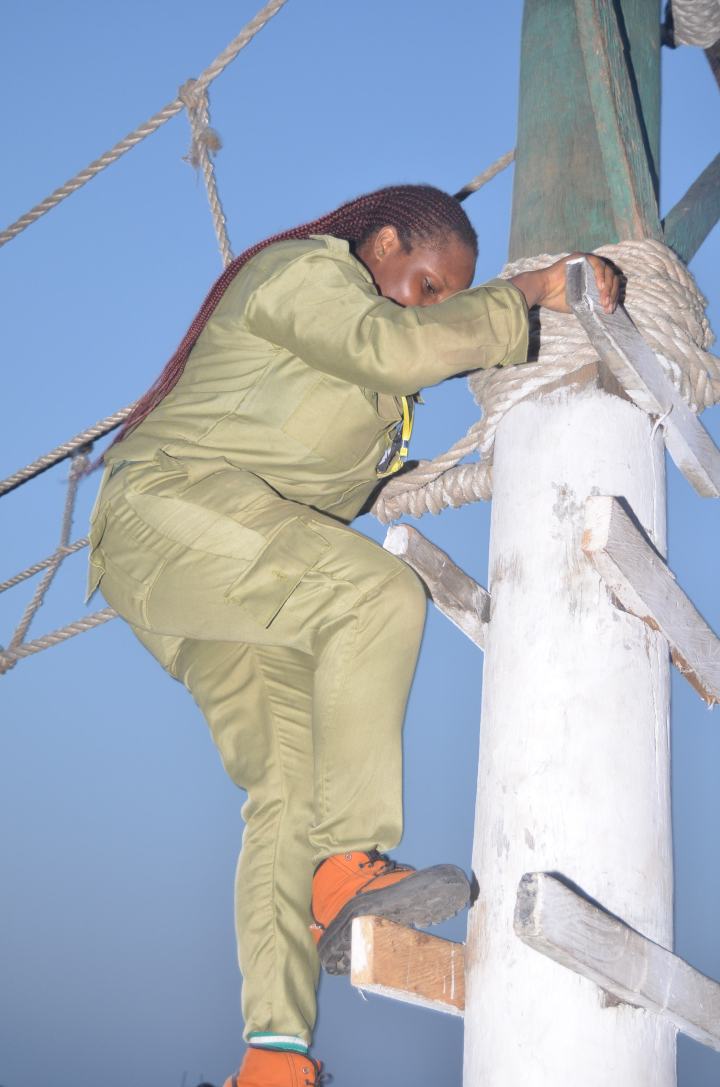 One of them came and tried to pull my leg back but I snatched it up. I was determined to cross the knot bridge 😂. And I actually  did it alone without any instructor. I had no single fear doing this. All that was on my mind was climbing it and getting to the end and that is what I did. It was later I realized how confident I was climbing it alone, even though I could have fallen.

I did not do the tension rope walking because time was really up. I did not want to overdo since they did not punish me for climbing the knot bridge when I was asked not to. But for your viewing pleasure, this is what the tension rope looks like.

You walk on the lower rope while holding the upper rope. You must not lift your feet!

What I learnt from the assault course

Whoooopppp!!! Finally done. It took so much time to explain all these but it was really fun too.

Please please please let me know in the comment section  if you enjoyed it. If you also went to camp, I want to hear about  your man o’war experience 😁😁😁. I like gist😂.

Thank you so much for reading fam! Don’t forget to let go of fear.  Be humble, focused and determined. Stay consistent people. 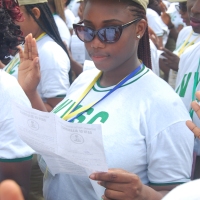